Our repertoire is consistently represented in cinematic and television films, series, games and websites.

Professionals in agencies and production companies, editors, directors and producers value our service as music supervisors and that we can also provide one-stop clearances where required.

Looking for very special music? Talk to us.

Wonderful "To build a home" song by The Cinematic Orchestra used in current Ikea TV-Spot, developed by the Kemper-Trautmann agency in Hamburg.

Movie about Bar 25 in Berlin

Energy 52's "Café del Mar (Kid Paul Mix)" and "Barcese" by Sven Dohse are featured in the movie 25/7 about the cult techno club Bar 25 in Berlin.

The movie Auf der anderen Seite der Leinwand - 100 Jahre Moviemento.from 2010 with “Wüste" by Einstürzende Neubauten now appears on DVD. The documentary, directed by Bernd Sobolla is about Germany's oldest cinema, founded in 1907 where Blixa Bargeld, singer of the Einstürzende Neubauten, once worked as projectionist.

In the new german movie “Blutzbrüdaz”, produced by Fatih Akin, Klaus Maeck and Oliver Berben, directed by Özgür Yildirim ("Chiko" 2008) featuring the german Rappers Sido & B-Tight you can listen the track "At Night" by Poppy.

The track “General" by The Vineyards from Norway (Groovy Music) are in the Braun Gillette campaign Braun GSYE Reloaded. 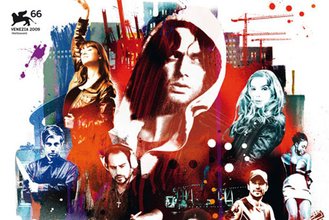 SOUL KITCHEN is a new kind of Heimatfilm ("homeland"-film, a genre that was popular in Germany in the 50s,centered around love, friendship and non-urban life.) But this time the village is a restaurant and the director is Fatih Akin. He has gathered a best-of cast from his previous films - Adam Bousdoukos (SHORT SHARP SHOCK, HEAD-ON), Moritz Bleibtreu (SOLINO, IN JULY), Birol Ünel (HEAD-ON, IN JULY). Its about family and friends, about love, trust and loyalty and about the struggle to protect a place called home in an increasingly unpredictable world. Just after Venice Soul Kitchen will have its North-American premiere at the filmfestival in Toronto on Sept. 14th, and for its German premiere the film will be presented as opening film at the Hamburg Filmfest (24.09.09 - 03.10.09). Freibank placed the track "Sing Song Girl" by ER France in the movie.