"You often have to shout for a long time so that people can enjoy the silence afterwards." FM Einheit, 1993

First released in 1993, this documentary highlights the band's first creative phase, from the recording of the first single by Blixa Bargeld and N.U. Unruh under a motorway bridge (1980) to the last tour with the early line-up with FM Einheit, Mark Chung and Alexander Hacke (1993).

Based on interviews with all band members and with companions, videos and rare archive footage, the film shows the enormous worldwide influence of the band and proves the opposite to all those who associate Einstürzende Neubauten only with deafening noise. The protagonists take us on a journey through time, into the hollow space under a Berlin motorway slip road, where the band's history began in 1980, and other historical hotbeds of their tonal journey, and reveal amusing anecdotes from the band's then 13-year history.

Blixa Bargeld explains to us the odd title of the documentary and his method of writing lyrics. N.U. Unruh takes us to his big storage room full of self-constructed drum kit parts and sound bodies, Alexander Hacke to the hollow water tower at Gleisdreieck to demonstrate its unique sound. Long-time companions and supporters, including the writer Heiner Müller, also have their say in the documentary. This band portrait is complemented with brilliant live recordings of the last tour with this original line-up.

Available on Amazon, Google and Maxdome!

OUT: Alter- Vol. 2 by Viatorism

Alter- Vol. 2 is the continuation of the Alter- album by Automatisme published in mid 2020.

Viatorism is a duo of the producers Automatisme (William Jourdain) and Pheek (Jean-Patrice Rémillard). Their album entitled Alter- Vol. 2 is the continuation of the Alter- album by Automatisme published in mid 2020. The tracks are inspired by the writings of art theorist and critic Nicolas Bourriaud on the concept of altermodernism which reflects on the globalization and the saturation of time and space. They apply the concept of altermodernism to the temporality and the space of the electronic glitch and dub techno music to create generative rhythms and ambiences.

The album is also related to Ultrablack music series from the record label Mille Plateaux which experiments with the non-representation. It experiences an in-between and a nameless non-representation in which other temporalities can emerge. We meet there an uncontrollable music. is a dynamic structure that manifests sound productions that never finishes and that produces multiple versions of the tracks.

The OhOhOhs (formerly aka The Oh!chestra) play concertante, contemporary club music with a minimal set-up. With a degree in performance and composition and a specialisation in piano, Florian Waeldele composes the majority of their music, which now and then is inspired by the grand masters. His namesake Florian Dressler, the percussionist of the duo, continues to expand his rhythmic horizon learning from a variety of teachers. This project unifies their passion for classical music and percussion, as well as the aesthetics of the electronic dance scene from which they both originate. By using a grand piano (or electronic piano) and a percussion set – a rather unusual and rare combination – occasionally adding samples, The OhOhOhs create "a remarkable, virtually orchestral sonority." (Stereoplay)

Their debut album Vierhaendig (four-handed) is made of twelve original compositions, alongside an electronically-rhythmised interpretation of Beethoven’s final allegro movement of the moonlight sonata, revived a broadly positive response from critics (also in the classical field) and fans.

Thanks to the intersection of the projects and a fusion of the two, an array of future possibilities can be expected by expanding existing sounds with synthesisers and electronics opening up new, manifold possibilities and soundscapes.

After three years of musical self-discovery, the band Razz presents '1969-Conrad', the first single since the release of their second studio album 'Nocturnal'.

More than ever, their sound world shows a stylistic complexity with which they outgrow themselves - from a play between organic sound worlds and spherical synths arise those captivating melodies that form the DNA of Razz.

Written at times when fake news are unsettling ever larger parts of society, the song expresses a feeling of powerlessness: “It's terrifying to see how some people rely on dubious sources without questioning them and being casted under the spell of conspiracy theories. The fact that a virus can be so divisive is scary. Cohesion and trust in science definitely make more sense than ignorant egoism and tendentious scare tactics”, says singer Niklas Keiser.

Razz were just around fifteen years old when they decided to make music together in 2012. In 2015 they released their debut album 'With Your Hands We Conquer', followed by their second album 'Nocturnal' in 2017. With shows at well-known festivals such as Lollapalooza, Rock am Ring and the Hurricane Festival, and their own international headline tours as well as support shows for bands like Mando Diao, Kraftklub and Bloc Party, Razz developed into one of the most exciting indie bands on the German music scene.

After three years of silence, Razz releases new music and the single '1969-Conrad' is just the beginning.

Manfred Groove announce the release of their new album to be released in January 2021!

Manfred Groove - that's intelligent and laid-back German HipHop music full of interesting insight and weird jokes. Their new album 'Hinter der Tapete' will be out on January, 29th 2021 via Rummelplatzmusik.

'Ein Haus in den Bäumen' is the first single and a song about trying to build an alternative reality with art in a time, where everybody asks about the relevance for society.

Her latest single ‘Alien’ represents the story of a psychosis trauma, as she explains further, 'Alien is about a person close to my heart overcoming a psychosis induced by the ill effects of patriarchal structures. It represents the different forces that were triggered by a trauma that will always repeat itself unless it is healed within oneself. These entities have a will of their own to tame them one needs to be extremely vigilant'.

'Alien' is taken from The EP 'God Undresses Me' which will be released in March 2021 and then followed by her new 70-minute intermedia live performance, 'Anima/Psyche'. The piece will be created by an international artist collective and presented on July 26th and 27th, premiering at the Münchner Kammerspiele. 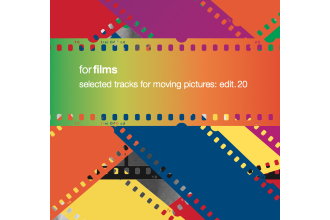 It's the 20th edition of our for films series, a jubilee double CD with lots of fresh songs to be used in films, documentaries, games and whatever else you can think of - just perfect fits for moving pictures!

OUT: 'Wonder Why' by Ryk

Ryk returns to focus on his own career from duties as musical director of huge shows and performances for Cirque du Soleil.

Building toward the release of single 'All He Wants' on the 'Parasite Future' EP due on 5th of February 2021, he released 'Wonder Why' in November and 'West End' on 18th December.

He is scheduled to work on the video to 'All He Wants' with director Gustav Olsson in January and has a lot more outstanding material up his sleeve. Watch this space.