OUT: 'The Brain Of Flex Busterman' by Patric Catani

Patric Catani finally presents his follow up/ sequel album of his 90s video game soundtrack album 'The Horrible Plans Of Flex Busterman'. Again, it is produced on the old Amiga Homecomputer, but with a newer tracker music program called "AHX Tracker" which doesn't work with samples, but only chiptune style self created sounds, which gives the whole thing a pretty different flavor.

The Brain of Flex Busterman turned out more fierce, more psychedelic and much more wild than its predecessor. Since years, Catani always come back to some Amiga and Tracker work and surprisingly there is still new hardware, software and methods to surprise yourself with the oldschool 8Bit sound.

The Brain Of Flex Busterman is out since November 6th, 2020 via Storage Records.

Enjoy the journey through The Brain Of Flex Busterman!

"In November 2010, Connaisseur released Kollektiv Turmstrasse’s 'Rebellion der Träumer' - a timeless album with a major impact on both the artists and on the label. It was a big success in every direction and even now after 10 years, the album still is a milestone. Reason enough for Connaisseur to celebrate the 10th anniversary of the two German northener's debut album both with a long awaited repress of the double vinyl, as well as a fresh round of remixes."

Remixes by ELFAN, Girls On The Internet, Blindsmyth and many others more.

OUT: 'Something To Lose' by Better Person

Better Person's debut album ' Something To Lose' is now out via Mansions and Millions!

Do you have something to lose? Maybe the kind of love that makes you understand there is more to life than getting lost in the bluish fog of yet another smoked-out bar? Berlin’s very own Better Person, the silent prince of the city’s international late-night underground pop scene has found it.

Better Person is the moniker of Berlin-based Polish singer and balladeer Adam Byczkowski. After his 2016 EP 'It’s Only You' captured the sound of late night intoxication and devastated croons to an empty dance floor, the singer toured relentlessly, traveling all over Europe, North America and Asia, moving and living in Montreal, Los Angeles and returning, time and time again, to Berlin.

The young Polish singer traveled to California after a chance meeting with MGMT’s Ben Goldwasser at a Berlin after hours club. An introduction by a mutual friend culminated in a relocation to Los Angeles, to complete his debut album with help of the producer. Goldwasser’s obsession with synth programming and acumen for generation-defining pop hooks underlines the strength of Better Person’s deeply personal songwriting. The result is an expansion of Better Person’s inner world, without sacrificing any of its enigma.

'Something To Lose' was released on Mansions and Millions. The label, run by Anton Teichmann was awarded 'Best Label' at this year's VUT VIA! Awards.

For more than a decade Alexander Dorn has shaken electronic sounds, stirring shapes and forms that adhere to few genre tags.

Being sonically socialized through Hip Hop in the 1990s, Graffiti and Breakdance were the first outlets for his creativity, music dominating his daily life since a young age. It was through Hip Hop Culture that he realised that you don’t need a degree or know how to play an instrument to create your own music.

Inspired by the US Ghetto music of the 80s his journey to explore the endless universe of sound had kicked off. Leading him through many phases of musical preferences: Classic Electro, Reggae Dancehall, Italo Disco, Chicago House, Detroit Techno, New Wave or Ghettotech…

After concentrating on numerous styles his mission became to combine different influences in DJing and production. Music without genre and boundaries is also the concept of his label Rat Life Records, since 2014 it has been a platform for his own output and those of like-minded artists.

Having released many EP’s, Compilations and Collaborations on labels like Uncanny Valley, Chiwax, June, Nation, Bordello A Parigi or Pinkman and especially his 2017 debut Album 'Game Over' show the many voices of an open minded artist. Even now Credit 00 is always on the look out for the unknown and seeks to challenge the listener and himself rather than fulfill expectations.

Milo Milone's solo EP of the same name has been released October 16th via popup-records!

Drenched by the Californian summer, the record is characterized by the freedom to find what has always been there. Inspired by a road trip through California, and recorded in her heated-up garage in Silverlake Milo Milone reflects exactly this feeling in each of her six songs.

Finding is easy when you're not looking. The solo debut of Milo Milone, who now lives in Los Angeles, is of a fascinating lightness which the artist presents in many facets and outside the Rhonda band context, which is dominated by soul music. The songs testify to the freedom to find what has always been there: her very own voice, her very own vision. The self-titled EP therefore doesn't sound like classical soul, even though there is a lot of soul in it.

The often doubled vocals are framed by choirs with a lot of reverb and give the music a psychedelic note, in which the longing for the desert resonates. The result is a perfectly imperfect record in which previous musical experiences, California, the dirt of the big city and the attraction of the new are reflected. The songs mark snapshots in time and yet are timeless. They radiate bittersweet longing and the feeling of bygone days; little treasure chests, as if found by chance and ready to be opened. 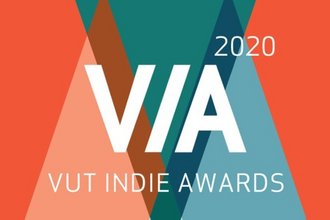 Einstürzende Neubauten nominated for 'Best Experiment' at VIA Awards 2020

Einstürzende Neubauten are nominated for this years VIA Indie Award in the category 'Best Experiment'.

This year marks the bands 40th year of existence. This also means 40 years of experimenting with sound and it's various hemispheres. Einstürzende Neubauten have never stopped searching for new inspiration and are still going strong looking for undiscovered sounds and noise.

The awards usually take place at the annual Reeperbahn Festival in Hamburg, but due to the Covid-19 pandemic will be held online in a digital ceremony on the 17th of September 2020.

OUT: 'Dawn Is Mine' by Vilette

Villete aka Amsterdam based producer Anne Korteweg returns to Scissor and Thread with a brilliant new EP. Her debut 12" 'Girl Next Door' was released on Scissor and Thread in the fall of 2016 and sold out quickly. Now here with the new EP 'Dawn is Mine', we are treated to seven tracks of understated, floating beauty. On her new release she explores the more abstract sides of electronic music. Using a variety of synthesizers, she creates rich and lush sounding structures that continuously bend and flow loosely.

OUT NOW: Thilo Schölpen - Across the Universe

'Across The Universe' is the third piano-solo album by Thilo Schölpen. Like the previous albums "kraftwerk-klavier" and "Piano Diary", this one also feeds on his affinity for the beatnik culture and for new wave, electronic and avant-garde music, with references to the world of pop.

With a light touch and yet hypnotic depth, his music takes you on a captivating journey where reggae meets wistful melodies and a slightly African rhythm reminiscent of Damon Albarn. Across the Universe is piano music that focuses not on the instrument, but on the composition.

Thilo Schölpen studied jazz piano at the Amsterdam Art School. As a pianist he is known for his solo concerts; as an experimental musician he performs in ensembles and as a soloist.
'Across The Universe' entered German Jazz Charts, highly acclaimed in german jazz press, they even call it an 'album of perfected architecture' (Jazzthetik).