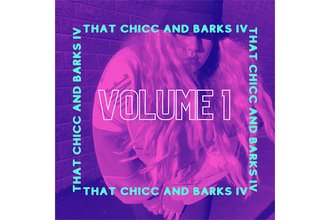 That Chicc And Barks IV is a collaboration between Berlin based producer Bjarke Sørensen aka Barks and Atlanta based singer Kali J.

Between them their songs have been used by some of the biggest brands in the world including Google Pixel, Samsung, Pepsi, Sony Xperia, Coca Cola, Nestle, Bose, Milka, DeWalt and many, many more as well as countless movies and TV shows.

Kali’s style is often described as a mix of Meghan Trainor’s sass, Sofi Tukker’s swagger and her own dash of confidence. Bark's production style is an upbeat blend of contemporary and oldschool. Debut EP 'Volume 1' is out on Bjarke's very own Deadly Tune Records on April 2nd.

Born and raised in Brussels, the german DJ & Producer Max Lean with more then 20 Million streams on Spotify created together with the singer/songwriter shooting star form Wales, Reece Lemonius a new and beautiful Dance-Pop-Anthem called 'Down'. The song got released on the Berlin label Up All Night under the distribution of Universal Music. The Song already got huge feedback on all streaming plattforms and is peacking right now with more then 10k streams a day. So one more reason to check this banger out…

Reece Lemonius also recently teamed up with Uplink for With Me. The song had an appearance in the 5th season of Fox series 'Lucifer'.

If it’s nice, play it twice! Exactly one year ago Rhonda released their most successful single 'Santa Barbara', meanwhile the song has gathered over 1.5 million streams on Spotify.

To mark the one-year anniversary and just in time for their performance at the International Music Festival at the Elbphilharmonie in May, Rhonda are releasing an alternative version of the song: 'Santa Barbara (Reworked)'. The new version enters a sonic world that is new to Rhonda. The modern pop production exudes a yearning atmosphere. 'Santa Barbara (Reworked)' sounds melancholic and enigmatic, yet the song remains catchy like the original.

OUT: 'Not A Day' by Patrice x Ezhel

Reggae is a form of protest music. On 'Not a Day' the versatile Turkish artist Ezhel joins forces with Sier-ra Leonean German reggae icon Patrice.

'Not a Day goes by without a fight' sing the artists on the hook, underlined by the words no love for bad energy. The struggle is real, yet these two are in for the good fight, which feels incredibly important these days that challenge the hope for so many.

Join the two chatting on Patrice's Youtube page at 11:55 pm CET for the video premier of 'Not A Day'.

The video for the single was directed by Baris Aladag, renowned for short movies and a history of charting music videos, its set design is symbolic to our ongoing isolation. But there is hope in that too – we'll see.

Munich producer duo Milk & Sugar have re-arranged legendary classics of the electronic club history. Together with the project Euphonica they created orchestral masterpieces of unique sound and fantastic radiance, interpreted by the Munich Symphonic Orchestra.

For this innovative album, the producers chose unforgotten Ibiza-Hits and Energy 52's 'Café Del Mar' is one of them.

The 1993 track became one of the most popular trance songs in the world. It's dozens of remixes appeared on hundreds of compilation albums. In April 2011, the song was voted number one by BBC Radio 1 listeners in Pete Tong's Top 20 Dance Tracks of the last 20 years.

'Genderation' is premiering at this year's Berlinale!

Monika Treut's Film new film Genderation (the follow-up on their 1999 film 'Gendernauts') has been selected for the Panorama section at this year's Berlinale - showing from March 1-5!

The soundtrack has been provided by Mona Mur.

The title track 'Venus' also announces her re-release of her first full album 'Mona Mur' (1988), she created with legendary Stranglers musicians JJ Burnel and Dave Greenfield on their compound in beautiful and enchanted East-Anglia.

Post-punk.com did a great review on the upcoming album!

It will be out in summer 2021 via Playloud. Pre-order the album here.

OUT: Danielle de Picciotto - 'The Element Of Love'

Her compositions are a mixture of spoken word, electronic soundscapes and melancholic violin harmonies moving from experimental sounds to mystical melodies. Her album reflects the broken heart of our society, which has almost destroyed our planet thanks to corruption but also reminds us, that: “We who fly to the moon and have Einstein’s theory, Truly underestimate our own glory.”

'The Element of Love' is out since February 14th, 2021 via California-based Broken Clover Records.

New signing: Spoon And The Forkestra

Coming from a rehearsal room lit by fairy lights and surrounded by the intimate tranquility of the night, Spoon And The Forkestra musically roam messy woods and enchanted flat-share-kitchens. They are recounting bedtime stories about sleepless nights and secret sentiments before hand in hand shouting at foreign walls.

It is a wonderous nostalgia that surrouds the young duo consisting of a girl from Hamburg and a boy from Mannheim. Timo Zell’s delicate basslines gently dance around the fragile yet powerful voice of Emily-Mae Lewis who seems to be whispering her metaphorical stories directly into their listeners’ ears. Folky elements meet psychedelic melancholia, the freedom of Punk encounters the sensuality of Jazz and Soul music. We are experiencing a musical embrace - both slightly beautiful and a little gnawing at the same time; a reverberating kind of intensity stimulating awareness for the long-gone.

When on stage, Spoon And The Forkestra turn it into a playroom - as the two of them or along with drummer John Winston Berta as a trio. They musically elevate themselves to the highest spheres just to make everything fall into shivering silence in an instant.